All Aboard! A Rocky Mountaineer Adventure 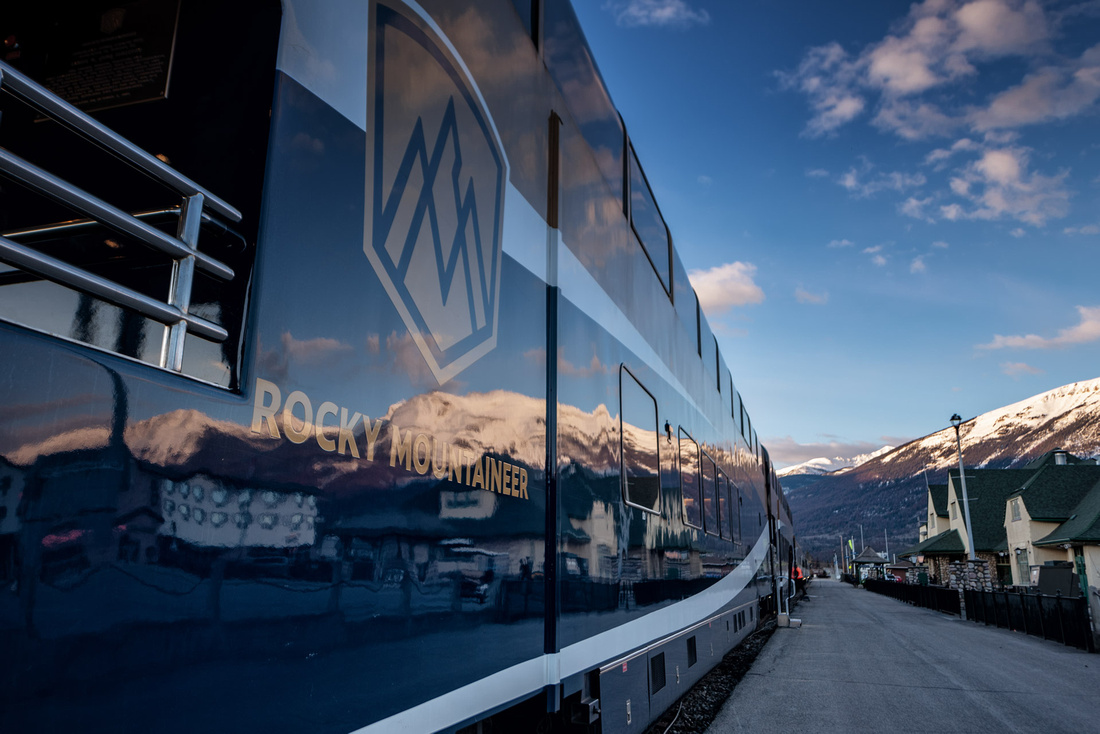 The mountains of Jasper reflect in the spotless train cars at first light.markjinksphotography.com

The mountains of Jasper reflect in the spotless train cars at first light.

It's dark as I approach the train station, I can barely just make out the silhouettes of the mountains surrounding Jasper. I'm immediately greeted by some of the Rocky Mountaineer staff, surprised at how early I am. Just here to get some sunrise shots before boarding, I reply. I'm introduced to two staff members who are willing to give me a little behind-the-gates tour before the remainder of the passengers arrive.

The sun first starts to rise over this sleepy little mountain town. Despite next to no cloud cover, the orange hues illuminate the freshly cleaned coaches of the train we will be riding aboard, making our way through the Canadian Rockies to Kamloops on the first leg of the journey. I setup, and shoot along the length of the train, looking for different angles and perspectives. Soon, other passengers begin to arrive, and the sound of an Indigenous drum beats in a pattern. Guests are welcomed and made comfortable, with coffee and fresh pastries in the station. There is a feeling of anticipation, as the pre-boarding ceremonies commence.

Growing up in England, I was fascinated with train culture. I was a regular trainspotter, sneaking away with friends to a bridge or embankment after school to watch different types of trains go by. When I moved to Canada in the early 80s, I instantly fell in love with the rocky mountains. How cool would it be to take a train through this landscape, I dreamed. Well, fast forward to 30-some years later, and here I was, ready to fulfill a lifelong dream of riding on a train through those same rocky mountains.

Moments before the boarding process, all of the guests and staff gathered round and commenced in a countdown, then we were invited aboard by smiling faces. We would be riding in GoldLeaf Service, which is like a double-decker version of a standard rail coach. We climbed the spiral staircase to the top floor and sunk into our comfortable seats, eyes wide at the size of the windows and open-view roof, you could instantly feel the comfort and luxury that this ride had to offer. 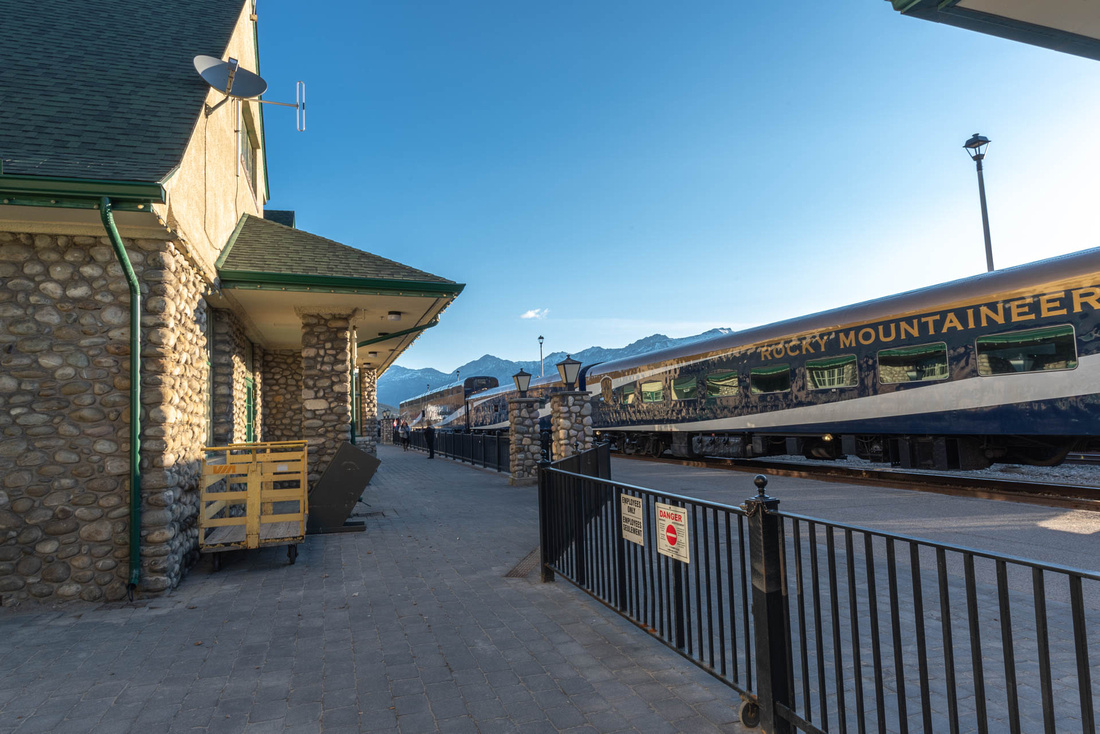 After a sendoff at the station, we lurched forward and we were off! Slowly slipping out of the Jasper townsite, our hosts introduced themselves and went over the timeline of events we could expect that day, safety policies, and an emphasis on just how much fun we were about to have. They were barely into it when we heard "bear on the right, bear on the right", sure enough, as our coach passed, a young black bear was ambling up a hillside. For some, it was the first bear they'd seen. It would be the first of many wildlife sightings on this journey.

A view down along the train from the vestibule.

A view down along the train from the vestibule.

If you are interested in doing some photography on this adventure, I'd recommend bringing at least a couple of different lenses. A telephoto for wildlife, distant subjects, compressed landscapes, and a wide angle for interior shots, tunnel approaches, and general landscapes that include the train. You'll have to shoot at a very fast shutter speed while moving along unless you want to incorporate some motion blur purposely. I also recommend a good camera strap. I rarely use a strap on my camera as I mainly shoot landscapes on a tripod and I find it gets in the way, so I opted for a Peak Designs slide strap that can easily be removed from my camera body, and is comfortable to wear. 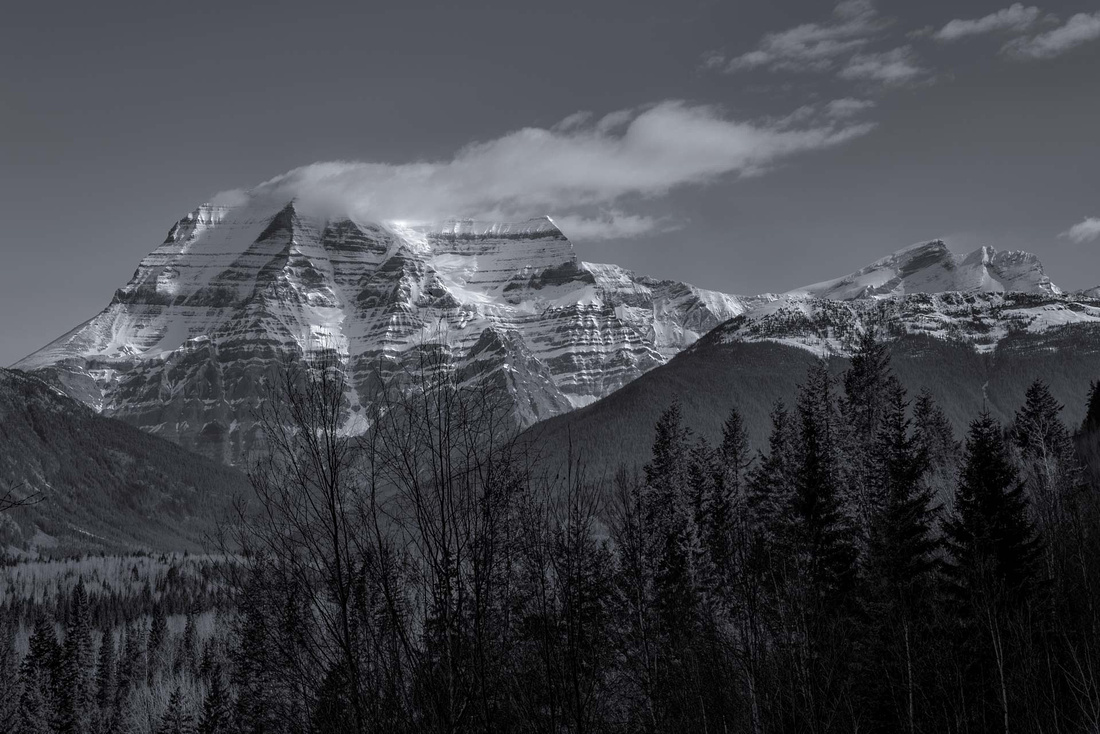 One of the main attractions on this leg of the journey is the unmistakable Mount Robson. Standing at nearly 4000 metres (13,000 ft) it is the highest point in the Canadian Rockies. Located entirely in BC, it has its own Provincial Park and is an area frequented by hikers and campers each Summer. At this point, your journey starts heading South, running parallel to Highway 5, the corridor through Blue River and Clearwater, near Wells Gray Provincial Park. This area is great for spotting black bears. 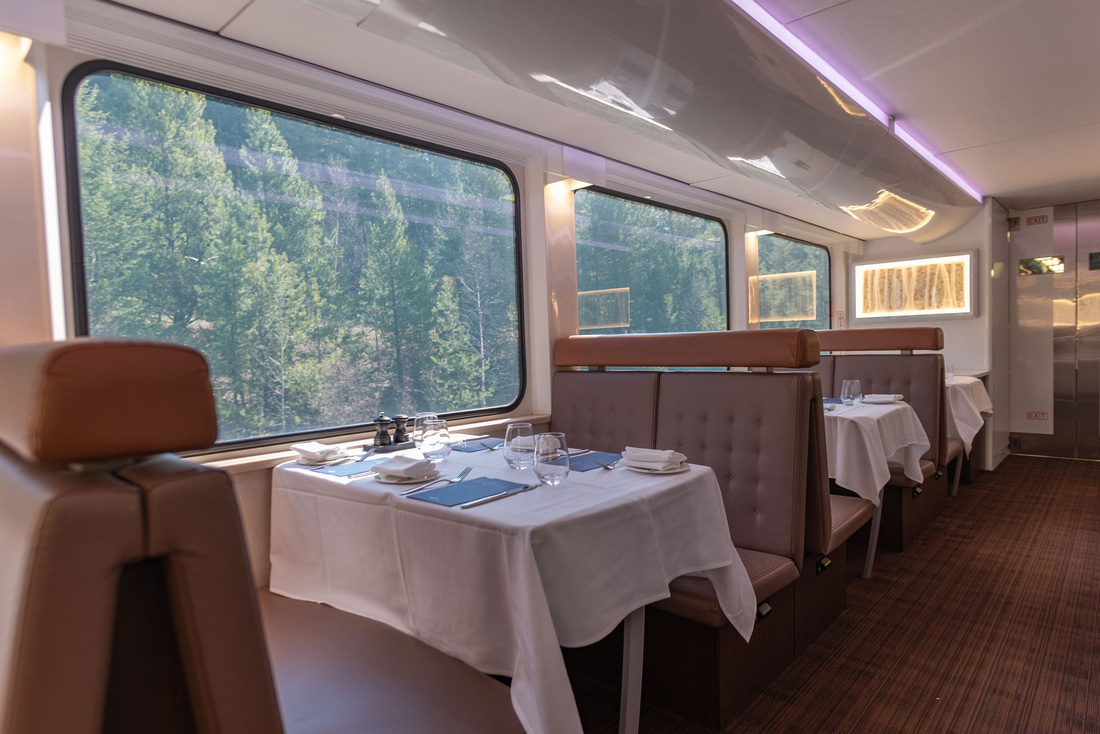 The dining area is located in the lower level of the GoldLeaf Service carriages.

The dining area is located on the lower level of the GoldLeaf Service carriages.

One thing you never have to worry about on Rocky Mountaineer is going hungry! It seemed like we would just finish a meal, and preparations were being made for the next one. Having a smaller passenger load, we were able to all eat as one group and we're called down below for each meal. For larger groups, staggered meal servings would be required. The food was absolutely incredible, all prepared fresh from an onboard kitchen, made up of award-winning chefs. Snacks and drinks are constantly offered to you in your seat, so you never have to ask or wonder when your next food or drink will be. 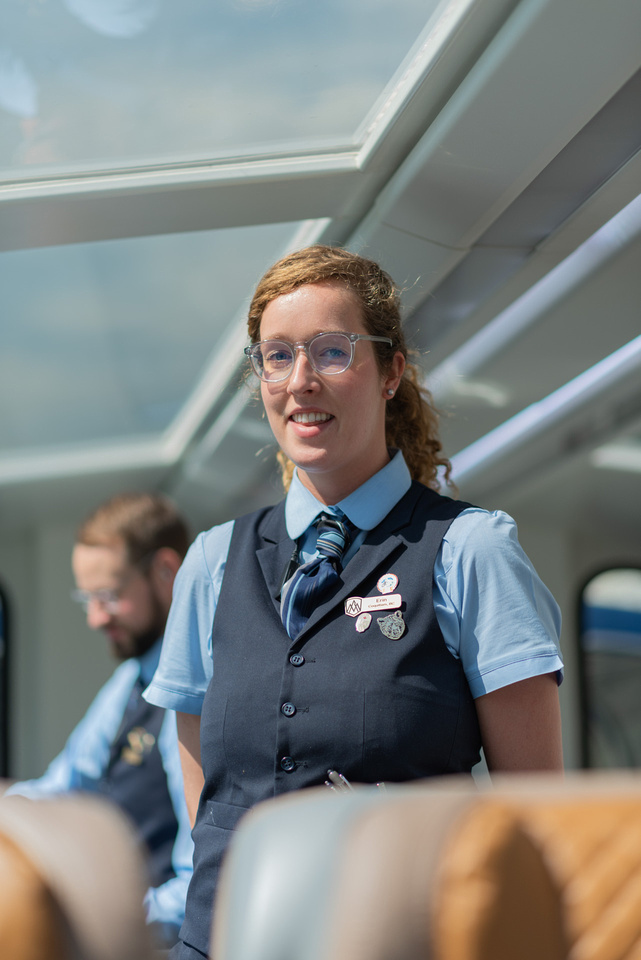 Erin, one of our wonderful hosts on this trip

Erin, one of our wonderful hosts on this trip

The staff on board the train were incredibly amazing. Full of knowledge, trivia, and cool little facts that I had no idea about. There were a few times that we were waiting for freight trains, and during these downtimes when we weren't moving, the staff always kept us well entertained. Our crew consisted of Erin, Kenny, Jocelyn and Kayla, who all took turns as hosts, MCs, and servers. The crew can sometimes work 16 hours a day, as they are the first ones to board, and last to get off the train. This is seasonal work, as Rocky Mountaineer runs from April to September, so a lot of the staff I talked to travel during their time off, or work a different job in the winter season.

Take some time to talk to your fellow passengers. It turns out we were the only Canadian passengers on this particular coach, and it was great to hear stories from all over the world. Some passengers were visiting Canada for the first time, while others were on their tenth visit! Everyone was incredibly friendly! 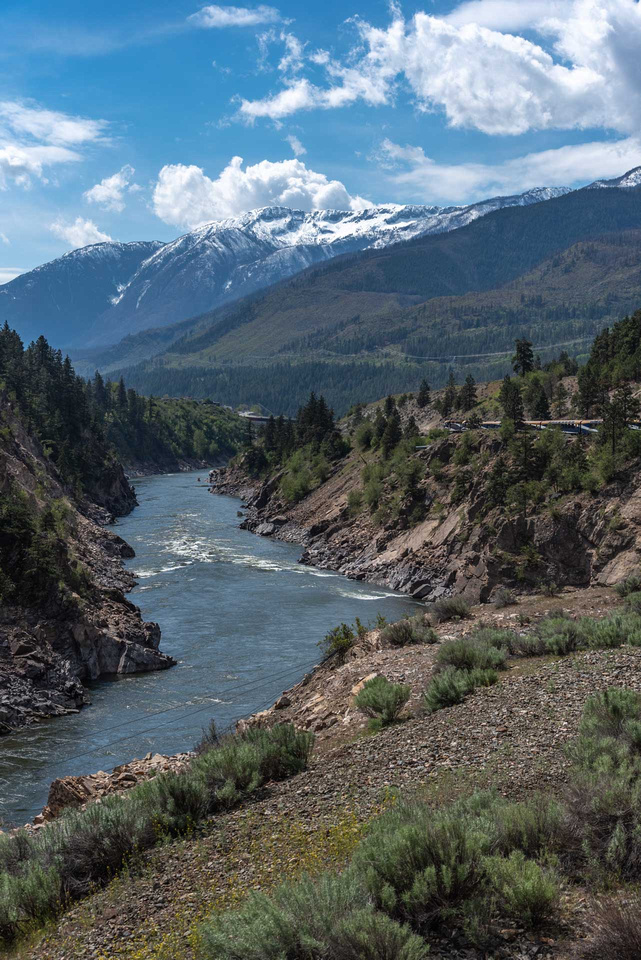 The area around Kamloops, BC.

The area around Kamloops, BC.

On Day 2, we embark from Kamloops, British Columbia to Vancouver. As we move out of the mountains, we encounter more of an arid desert-type landscape West of Kamloops. Lots of farming and agriculture, abandoned properties, and rivers make up the landscape in this area. We slowly follow  Kamloops Lake westward, where we see Bald Eagles and Ospreys along the shoreline, perched in trees, keeping an eye out for fish and other opportunistic meals. We enter several tunnels and cross many bridges as we make our way South to Hell's Gate. 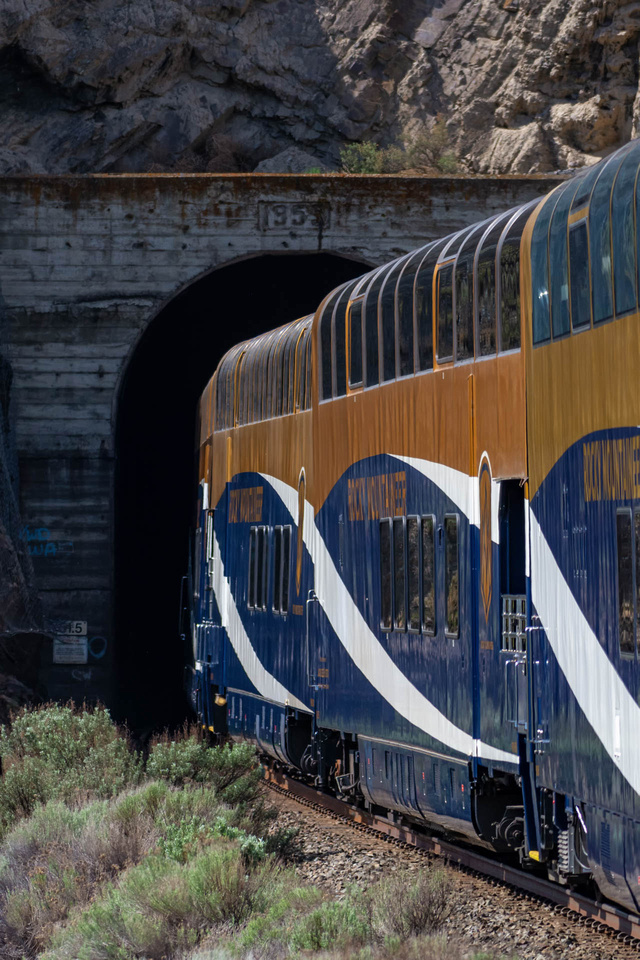 Entering a tunnel in the Kamloops area.

Entering a Tunnel in the Kamloops area.

Before you knew it, we were soon entering the Fraser Valley and the gateway to Vancouver. Orchards, farms, and waterways became the main scenery in this area, and the closer we got to Vancouver, a major port, the longer the waits became for freight trains ahead of us on the line, rail jams as they were called. The staff once again kept us well entertained during these non-moving lulls, and I personally enjoyed my time out on the vestibule, admiring the views and taking in the fresh air. Before long, we were pulling into the Vancouver station, and this amazing journey was complete. I would do it again in a heartbeat! 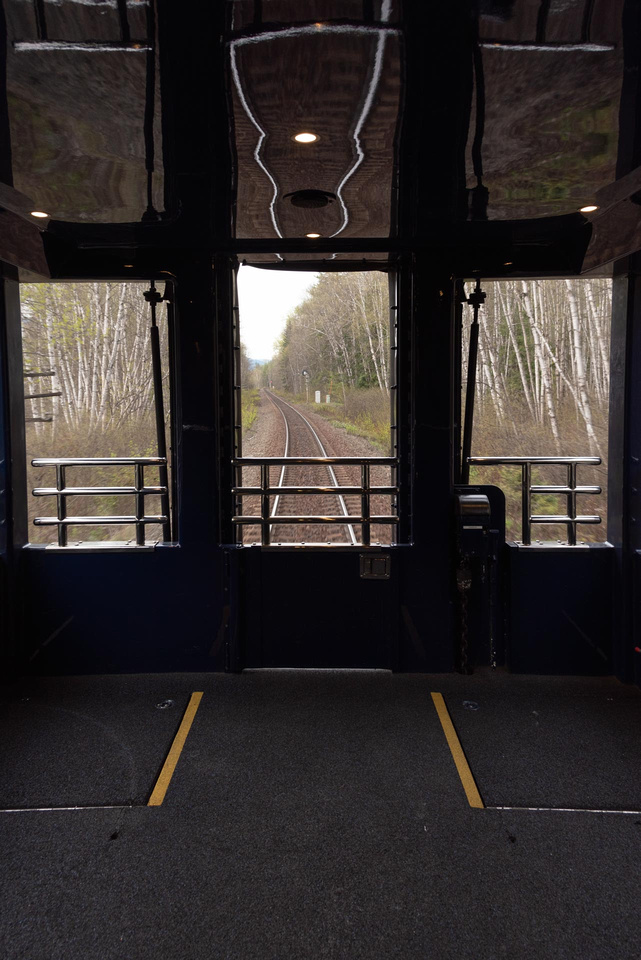 Looking out the back vestibule.

Looking out the back vestibule. 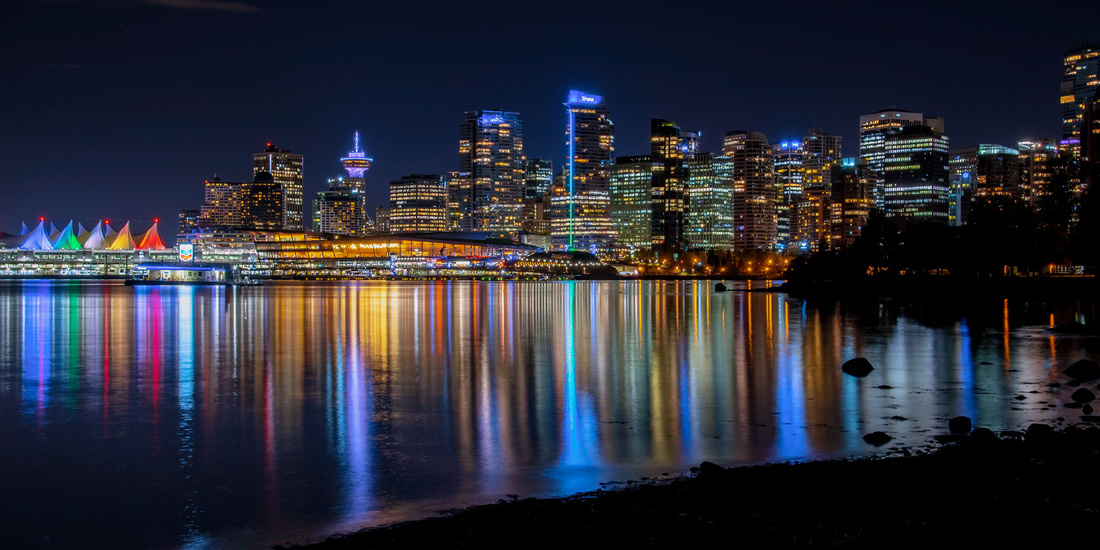 The Vancouver skyline at night, from Stanley Park.www.markjinksphotography.com

The Vancouver skyline at night, from Stanley Park.

One of the coolest things that Rocky Mountaineer did, was transport your luggage separately on the journey, directly to your hotel. When it was time to disembark the train, you were already checked into your pre-assigned hotel room, and your luggage was already waiting for you in the room, how neat is that?

Overall, I absolutely loved this journey. The views were pristine, the food excellent, and the staff were above and beyond accommodating. I highly recommend seeing the Canadian Rockies from this perspective at least once in your lifetime.

Mark Jinks Photography
Hi Linda, thanks for reading. I would recommend reaching out to Rocky Mountaineer via their website. I am sure they would love to send you the information you are looking for. https://www.rockymountaineer.com
Linda(non-registered)
Can I get some pamphlets and information I'm looking forward to taking a train rail ride soon
No comments posted.
Loading...
Subscribe
RSS
Recent Posts
A Northern Jewel - Blachford Lake Lodge All Aboard! A Rocky Mountaineer Adventure An Open Space Location Review - Tumbler Ridge BC, the great British Columbia Wilderness
Archive
January February March April May June July August September October November December
© Mark Jinks Photography
Powered by ZENFOLIO User Agreement
Cancel
Continue