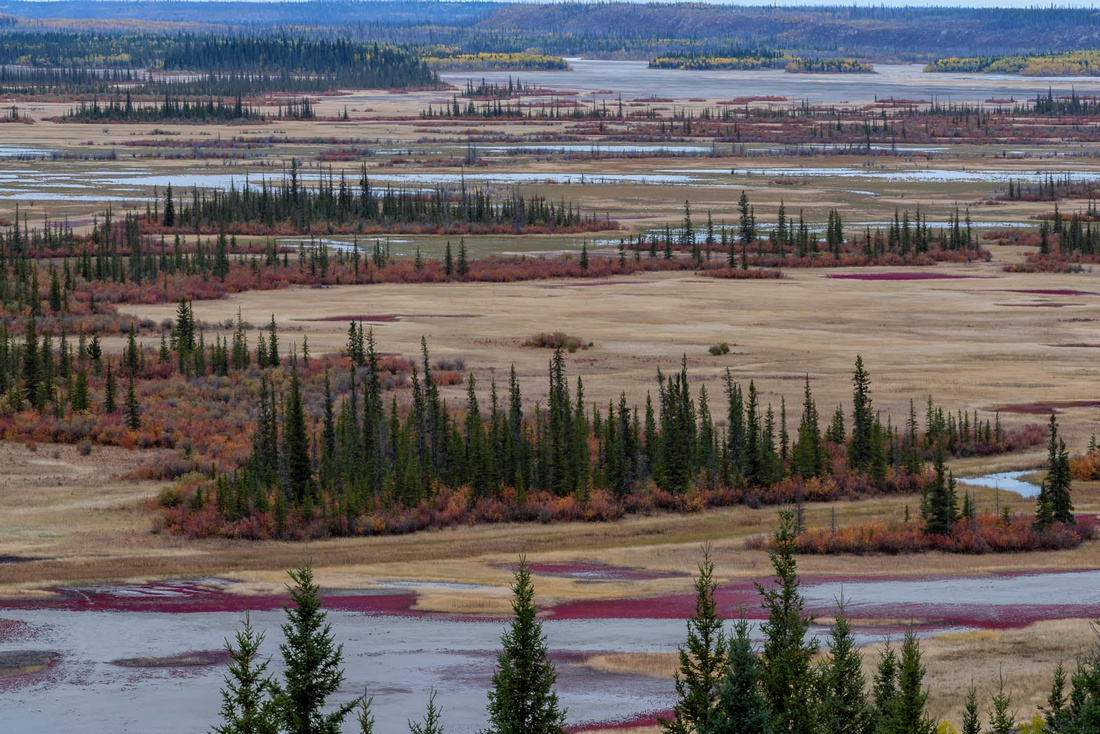 The Great Salt PlainsIn Wood Buffalo National park, just across the NT/Alberta border, massive salt deposits that can be seen from space accumulate over hundreds of kilometres. Here they are flanked by the lichen Red Samphire, as the Autumn colours of the North come to life in Early September.

These are some terms I would use to describe the Northwest Territories.

I finally had my first experience to North of the 60th parallel last Autumn, from September 9-16, as I made the 1100km trek North from Edmonton to Hay River. The plan was to get to Peace River the first night which is about halfway, and then finish it off the next morning. The return trip would be a straight shot 11 hour drive back. I had partnered with Ford Canada on this trip, and was driving a 2018 F150 Turbo Platinum. An ask from Ford, was the possibility of capturing some photographs of the truck underneath the Northern Lights. Never guaranteed, but I was going to do all I could to try and make that that happen. 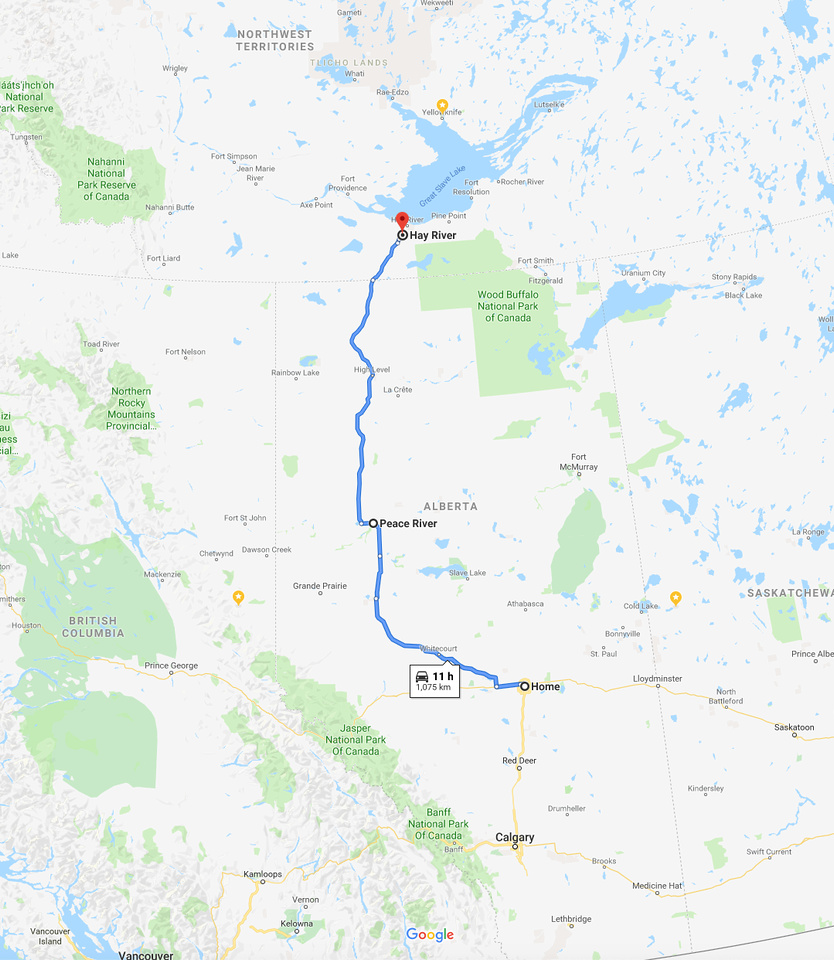 I left late morning and arrived in Peace River in the late afternoon. After relaxing at the hotel for a bit, I met up with local photographer friend Paul Lavoie, and we headed out for a sunset shoot overlooking the town. We caught a decent sunset over looking the mighty Peace River, before I had an early night, eager to get on the road at a decent time the next morning. 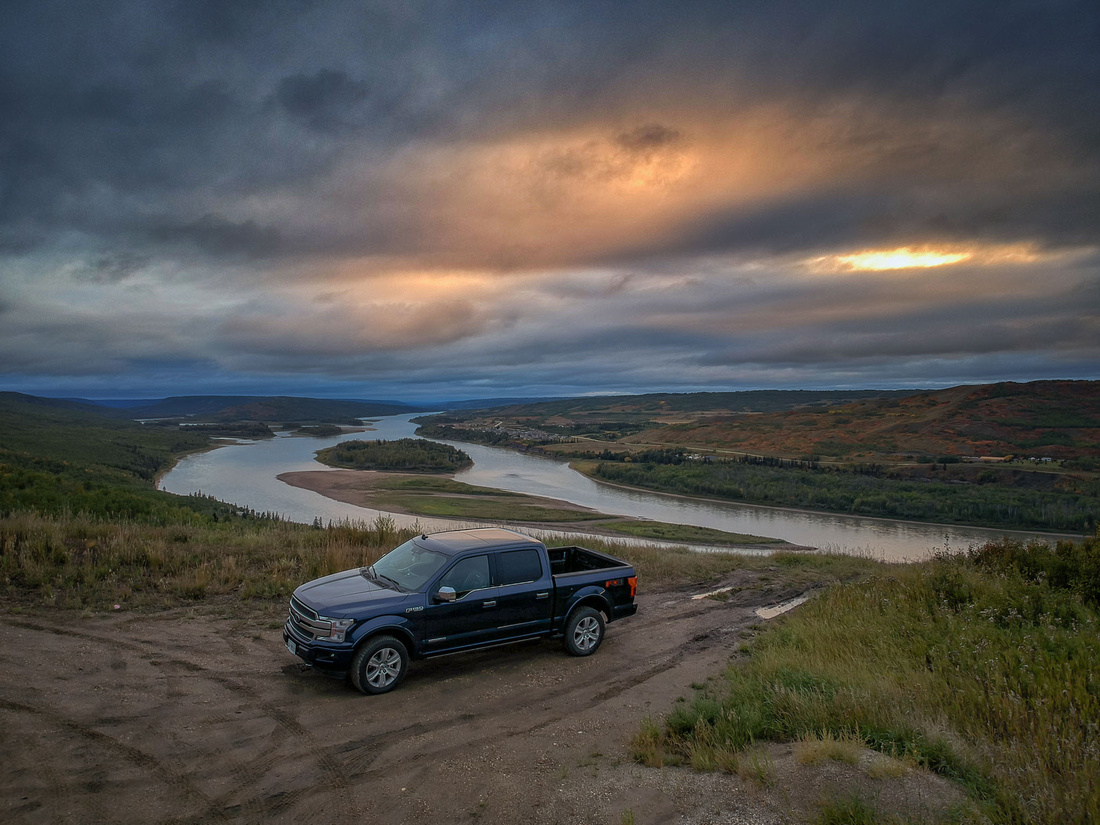 Overlooking the Peace River at Sunset

The next morning, weaving through open sections of the massive boreal forest, I was in High Level by noon. I stopped there for a rest before continuing North. After an obligatory stop at the North of 60 welcoming centre, I continued on to Alexandra Falls, an absolutely gorgeous set of falls that reminded me of a couple of falls in Jasper National Park.

I went down to river level to check out a few different angles, but overall I liked the look from the viewpoint, as some Autumn reds dominated the foliage. After a series of exposures at different speeds, I liked 1/5th of a second the best, and then fine tuned my composition. The end result was one of my favourite images from the trip, as seen below. 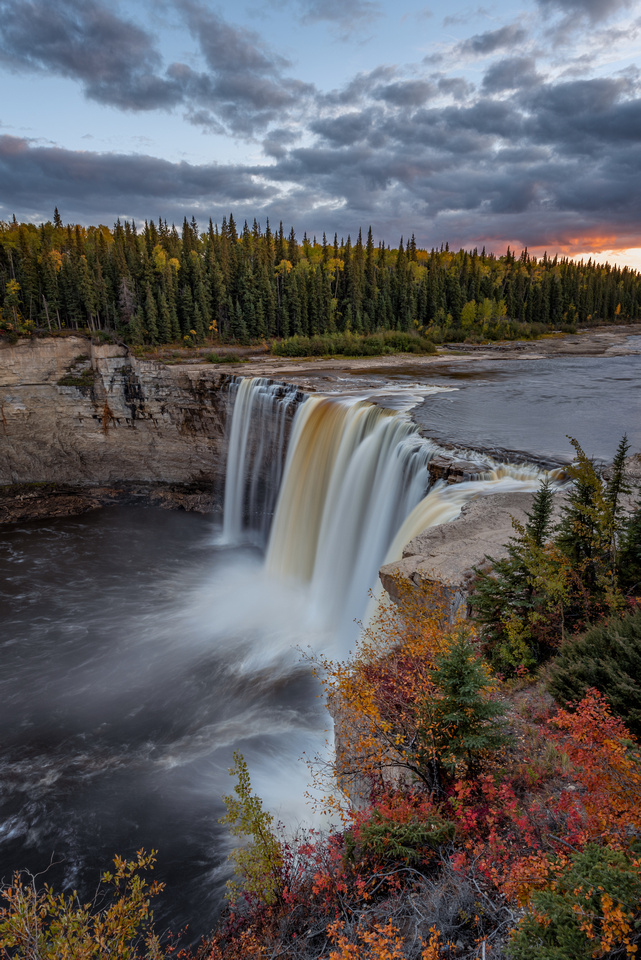 Hay River is about 20 minutes Northeast of Alexandra Falls, via Enterprise. We arrived at the Ptarmigan Inn Hotel, one of a few places to stay in town (also check out Eileen's Bed and Breakfast) and settled in, ready for the next 6 days in town. I had planned ahead some day trips. One day each for Wood Buffalo/Fort Smith, Pine Point/Fort Resolution, Lady Eveleyn Falls/Kakisa, and another two days to just stay local and explore the town and surrounding area. I decided it would be best to bookend those spare days on each end.

On this day we gathered some supplies and food to stock at the hotel, and explored part of the town. I had a great visit with Peter and Jared at the Hay River Tourism office, which is right on the main highway into town. Make sure to say hi from me if you stop by there! They were incredibly helpful and friendly. I went down the pier and docks, passing by a Coast Guard Base. That shows you just how big Great Slave Lake is (10th largest lake in the world). I met up again with my friend Paul Lavoie at sunset, who had made the drive up from Peace River. We dealt with an incredibly biting cold arctic wind during sunset which I wasn't quite ready for in early September, but we powered through and I got one of my favourite all-time long exposure images along the beach, using a huge piece of driftwood as foreground interest. 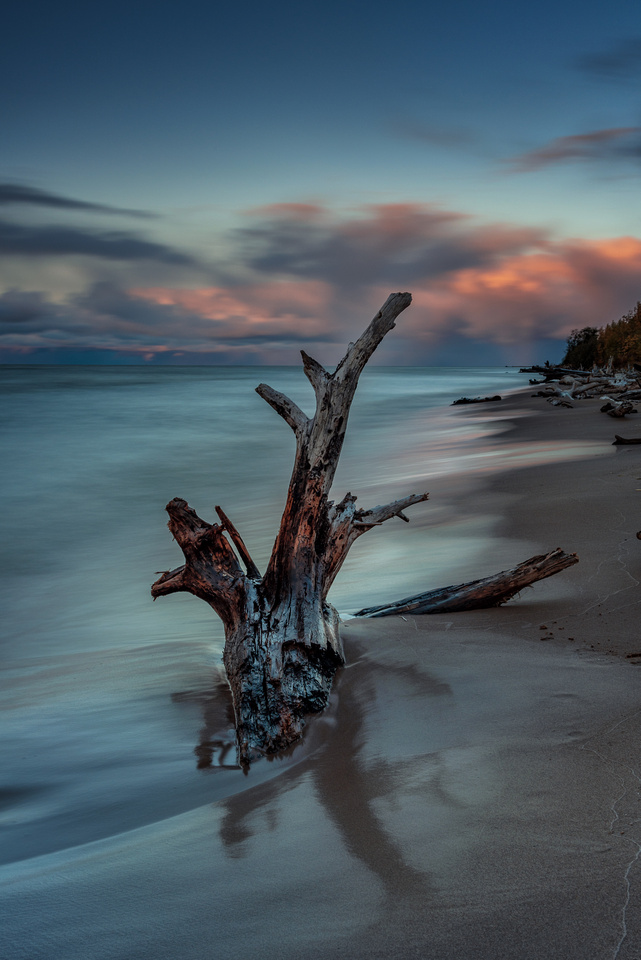 Driftwood along the beach at Great Slave Lake, NT

On Day 3 we headed for Wood Buffalo National Park. I was over the moon with excitement of finally seeing Canada's largest National Park, which is larger than the country of Switzerland. On the way, I encountered rain, snowfall, gorgeous fall colours, wildlife such as coyotes, bison, and black bears, sunken Karst holes,  and endless swaths of trees. But the highlight was the Great Salt Plains. Visible from space, these massive salt deposits stretch for hundreds of kilometres. Making them even more special, was the bloom of the Red Samphire lichen, surrounding each pool with a burgundy glow of this northern flora. The image at the top of this article shows the view of this incredible landscape. 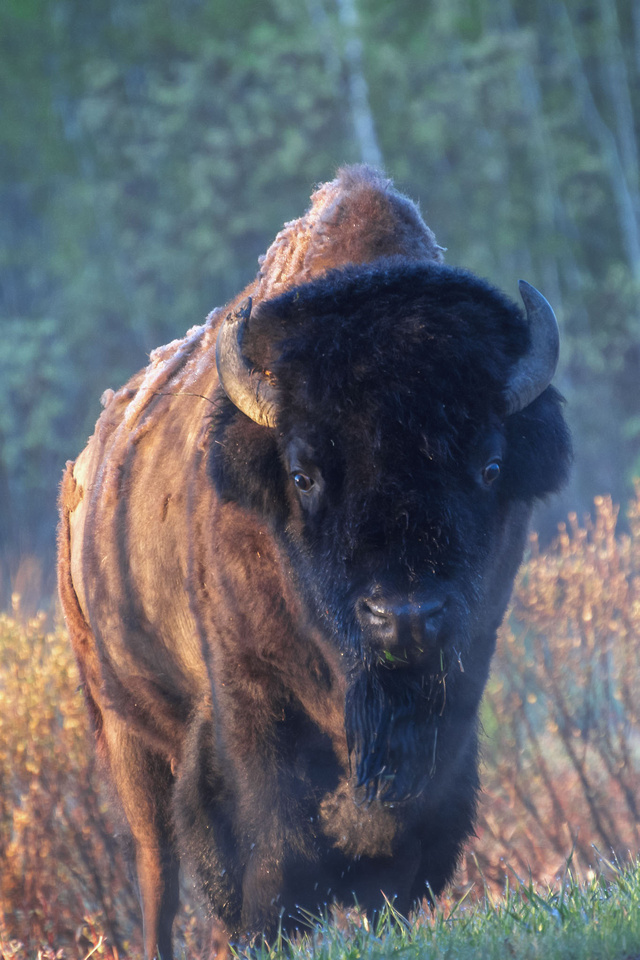 After a quick supper at the pizza place in Fort Smith, we began the 3.5 hour drive back to Hay River. It was a long, exhausting, tiring day, and all I could think of was shooting sunset and then falling into a deep sleep back at the hotel. But Space Weather Live had other plans for me.

I had timed this trip to land during the new moon cycle in September, and it really was a high priority for me to photograph the Aurora Borealis up here. The cell service was very spotty as I drove back through Wood Buffalo National Park, but occasionally I would get a slight signal. News of a Kp5 geomagnetic solar storm was predicted for the coming hours, which meant a really great chance of the northern lights. The cloud cover was starting to clear around sunset, now we just needed to hope for a few other variables to fall into place, a direct hit on earths atmosphere, negative Bz values, a solar wind speed upwards of 500 kp/s. If I lost you with some of those terms, I could write a future "what to look for to successfully forecast the Northern Lights" story? Let me know in the comments below if you're interested in something like that.

Anyway, as I neared Hay River and the blue hour was setting in, I didn't need to check the data any further. I could already see greyish streaks of light dancing across the sky in the final gasp of twilight. The aurora was out, and it was going to be incredible as soon as darkness falls completely. I contacted Aaron Tambour, a local photographer friend and we discussed a plan to meet up. I followed him and his friends out to the Kat'lo'deeche first nation lands, and we set up along an outflow stream of the lake to get some reflections. The northern lights on this night were far superior to anything I had seen in Alberta, despite being at half strength (kp4 vs kp8) from the best show I had witnessed to the South. 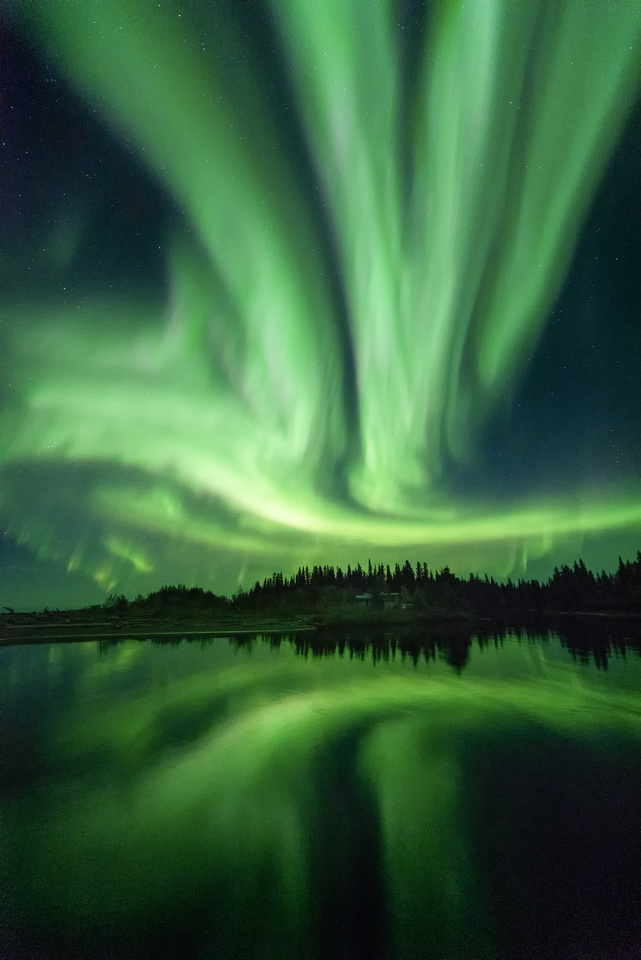 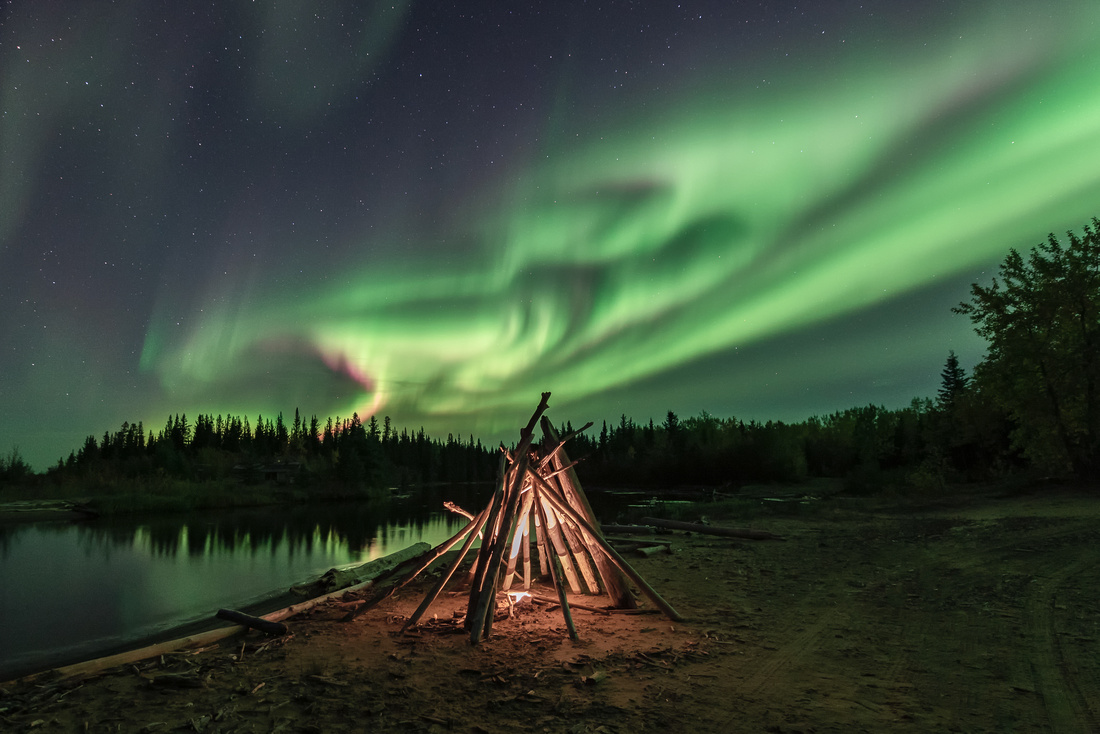 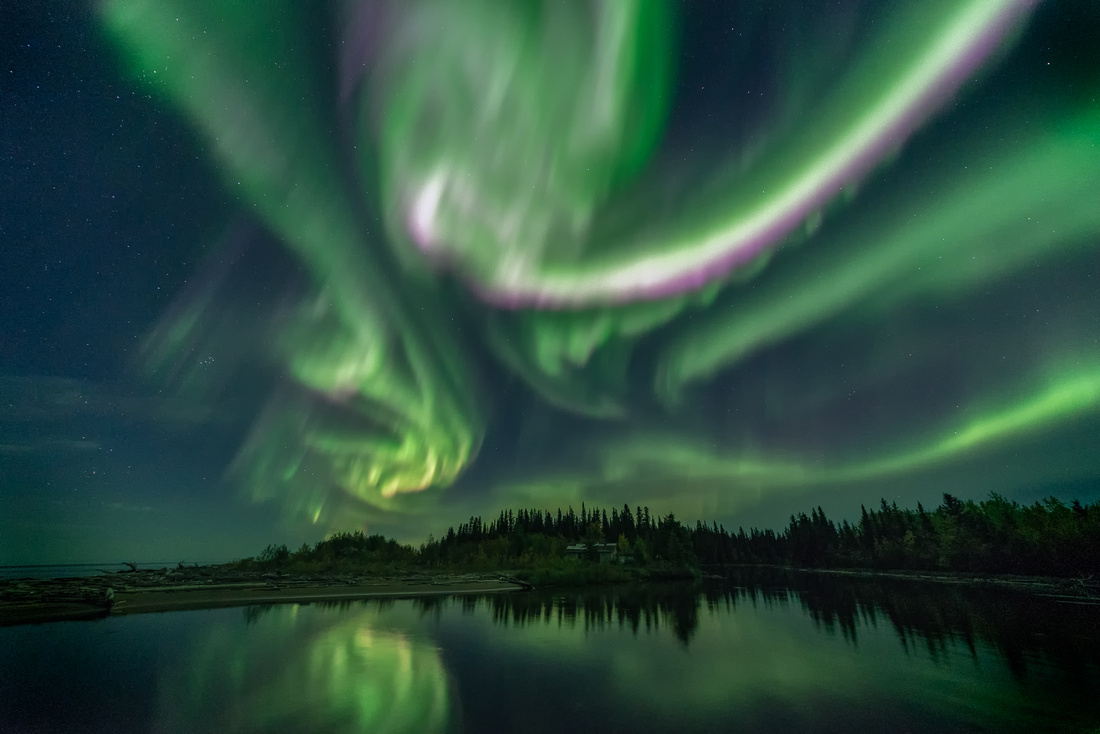 Powerful lights of the northNorthern lights above an old trappers cabin on an outflow stream of the Great Slave Lake.

As you can see, an incredible display. This lasted for only about an hour and a half. Every other night it was completely overcast, so this is a great example of, if you have the conditions, shoot it, don't make any excuses. I could have easily given up on this night being exhausted from all the driving, but as it turned out, I didn't get the opportunity again on this trip.

On this day I ventured West towards Kakisa and the beautiful Lady Evelyn Falls. As I passed some signs for Yellowknife, which is located approximately 5 hours from Hay River, I wondered when I would get there. Turns out I will be heading there for a week this coming September, 2019. Looking very forward to seeing Great Slave Lake from the Northern side. 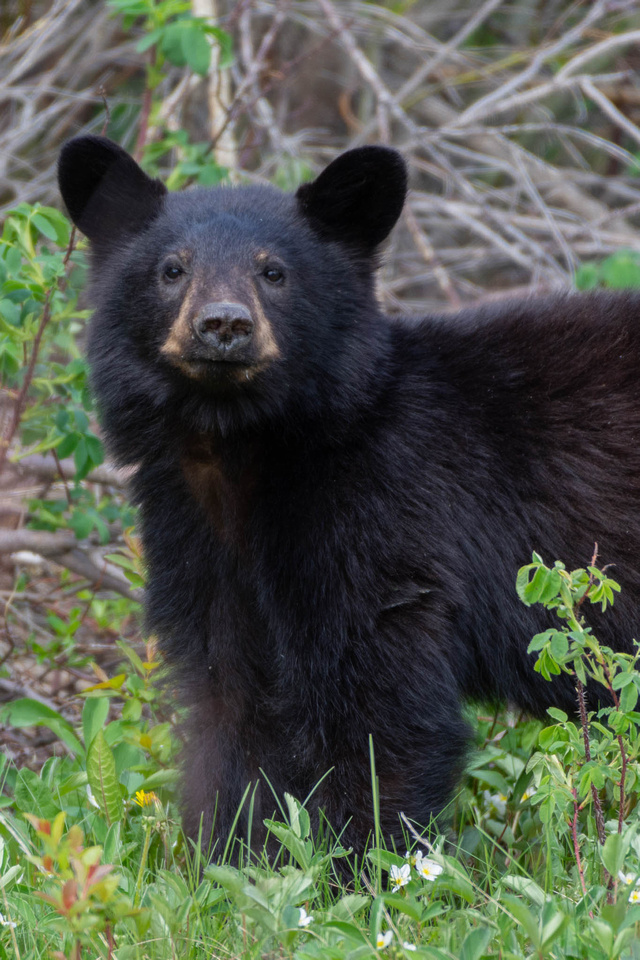 A black bear on the way to Lady Evelyn Falls

On day 5 I ventured out towards the ghost town of Pine Point, which has an interesting history. There is virtually nothing left of the town. Its actually an overgrown network of roads and subdivisions with no houses remaining, as the town was completely dependent on a nearby mine. At the peak of its existence in 1976, it was home to almost 2000 residents. The mine closed in 1988, and homes were sold cheaply, moved to nearby Fort Resolution or demolished. The population is now 0.

From there I ventured on to Fort Resolution, on the east side of Great Slave Lake, and likely the most remote community I had been to in Canada. I chuckled at that thought while I was there, that a few days later I would be heading to Toronto, one of Canada's most populous and easily accessed communities.

Sunset over the Hay River, NT

On day 6, I explored more of the town and rested up for the long drive back to Edmonton the next day. The trip North had been a huge success and I already knew I couldn't wait to get back. I think a trip North to the Yukon or Northwest Territories will be in my future each year going forward. The lack of people and tourists, the wide open spaces, the abundant wildlife and scenery are absolutely incredible. Oh, and then there is the Northern Lights of course!

If you decide to go, September is a great month. The bugs have retreated due to the cooler weather, the lakes are still open for incredible reflections, the fall colours are beautiful, and the nights are long for aurora activity. It dosen't take much on the Kp strength scale to put on a decent show up here. Also, historically, September is the clearest month during the aurora season. From October to December there is a greater chance of clouds and precipitation during the overnight hours.

Make sure to bring an emergency kit and have a well maintained vehicle. The roads are generally all in great condition and paved, but the vast distances between communities means very little traffic. You may not see another vehicle for over an hour. If you break down or need assistance, it's best to be prepared.

Being a northern community, the costs of food and fuel are much higher than in the South, so be prepared for that. Lots of warm clothes. A warm jacket, gloves, and a touque were essential despite only being early September. I did see temperature swings from -5 to 20 C.

Overall, a fantastic destination for some early fall colours, a vast expanse of wilderness, and a great place for photography if you are into nature and wildlife. This quickly became one of my favourite places, and I can't wait to get back.

Ohh and in case you were wondering. Yes, I did get the truck under the lights.... 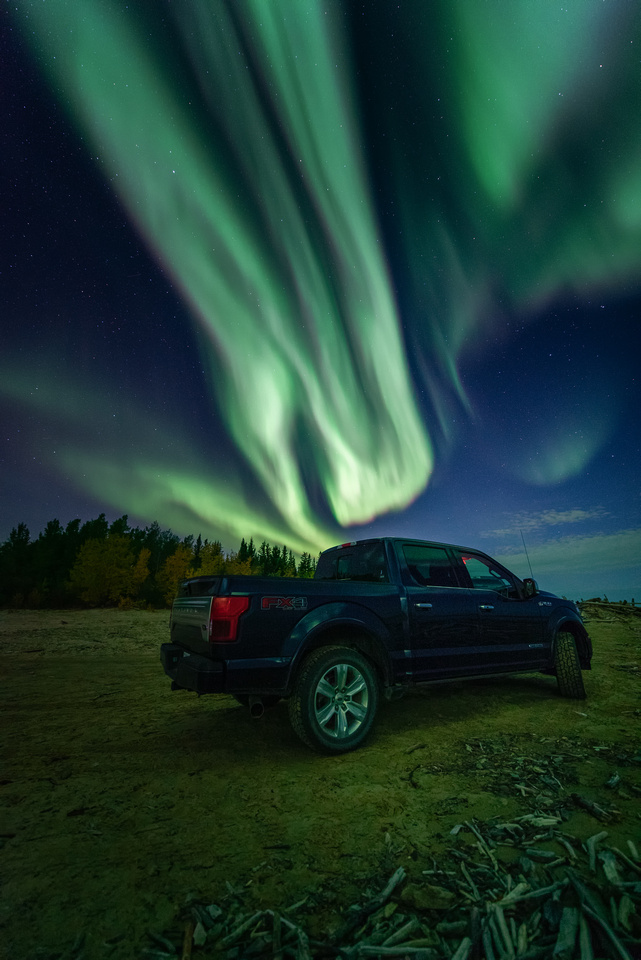 Until next time, keep your batteries charged! Adios!

Very special thanks to the following:

Neil Frandsen
Lady Elizabeth Falls has an old E-W Seismic Line which crosses just downstream of the Falls. The mouth of it can be seen in your photograph.
The spring that our Crew was finishing winter work in the area, we saw 5 t0 7 foot long Trout cruising just below the Falls, feasting on stunned small fish which had been swept over the edge in the brown muskeg-water from Kakisa Lake. By the by, the 6th Meridian (118°W Longitude) is also in the area and crosses Meridian Island in the Mackenzie River, downstream of Fort Providence!
I am 80, a retired Seismic Surveyor, who has watched the Northern Lights from 78° N Latitude, on the north end of Ellef Ringness Island.
Superb picture. Did you use the wooden stairs to go to the bottom of the Falls?
Joanne(non-registered)
Wonderful story with great pictures!!
My favorite picture of all times...the drift wood on the beach ❤️❤️❤️
Joanne(non-registered)
Awesome story and pictures
No comments posted.
Loading...
Subscribe
RSS
Recent Posts
A Northern Jewel - Blachford Lake Lodge All Aboard! A Rocky Mountaineer Adventure An Open Space Location Review - Tumbler Ridge BC, the great British Columbia Wilderness
Archive
January February March April May June July August September October November December
© Mark Jinks Photography
Powered by ZENFOLIO User Agreement
Cancel
Continue